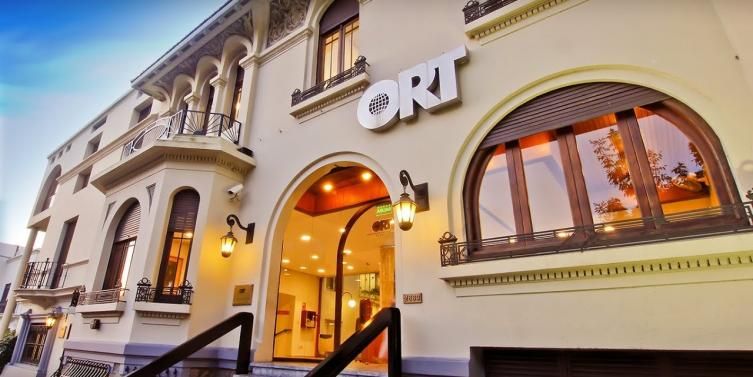 A Day in Uruguay!

We woke up to a chilly morning in Montevideo - hard to imagine that our friends in Delaware are in another heat wave!

Our first stop of the day was a visit to the Memorial del Holocausto del Pueblo, the outdoor Holocaust memorial in Uruguay, opened in 1994 and dedicated to the victims of the Holocaust. We were greeted by the architect of the memorial who explained the design to us. The memorial is located on the shores of the River Plate and is made of pink granite, with a central “window” looking out at the sea. A pair of railway rails sit at the approach and the central part of the memorial depicts two wooden bridge crossings. There are several inscribed granite plaques, one signed by Elie Wiesel.

After the memorial visit, we traveled to ORT University Uruguay, which is the largest private University here with over 11,000 students across five institutes. The students at the ORT University have won many prestigious awards and the University is highly acclaimed, and the students achieve a post-graduate employment rate of over 90%. ORT University is a member of World ORT, founded in 1880 by the Jewish community in Saint Petersburg, Russia. ORT schools are funded in part through our allocations process in our overseas allocation and have a long history of success for which all of our community members should be proud. Dr. Jorge Grunberg is the Director, and he addressed our Mission participants to provide a brief history of the school. We also had the honor of hearing from Dr. Grunberg’s mother, who is the co-author of the book “La Nina Que Miraba Los Trenes Partir” or “The Girl Who Watched the Trains Depart”. The book tells the story of Dr. Grunberg’s mother and her family who escaped from Belgium during the Holocaust and hid in the closets of righteous gentiles for years until they were freed and escaped to South America after the Shoah. Her story of survival was quite emotional and she was a truly inspiring woman.

VISIT TO A JEWISH AGENCY SCHOOL, THE AGENCY OFFICE AND SYNAGOGUE IN MONTEVIDEO

In the afternoon, we visited a Jewish Agency School for children beginning in kindergarten through High School. We were treated to a special program with their “ShinShin” who are 18 year old students from Israel who have completed High School and are working in Jewish schools to serve as Ambassadors from Israel, similar to our Shlichut Program. These ShinShin live with local families and are immersed in community life in Uruguay and are beloved by their “families” and the school children they work with. The two young women we met speak Hebrew, English and Spanish fluently and have chosen to take a year of service before entering the army to work in these schools and were so impressive! Wendy had the honor of presenting a gift to one of the ShinShin, Luva, from her parents in Israel and we all had a wonderful time getting to know these young women. We got to interact with the young students and tour their school and watch some of their activities. Over 800 children attend this particular school and they all seem to love it!

After seeing the school, we toured the Jewish Agency offices in Uruguay where we met the local director who is completing her service here before heading to New York next month to begin a Master’s Program. At the Agency, each of us had the chance to work on an Art Project to be displayed which depicts different aspects of Jewish Life here with the saying “Cada uno de nosotros, juntos” which translates to “Every one of us, together”. It reminded me of our JFD tagline, “We Are Stronger TOGETHER” and seemed most appropriate as it shows how our collective support makes such a difference for Jews all over the world.

Before leaving Uruguay, we also visited a local synagogue where we heard from another Jewish Agency Program Leader who relayed the experience of being a young Jewish adult in Montevideo. Almost all children attend Jewish schools and participate in Jewish club communities which have created a very close knit Jewish community who are immersed and engaged in Jewish life and have very Zionistic views and close ties to Israel.

Thursday evening, we boarded the ferry again for our return trip to Buenos Aires. It was an amazing and full day in Uruguay where we all had the chance to see first hand how the Jewish community continues to thrive and how the Jewish Agency is ensuring they have a strong future thanks to Federations across the world.